The IDPS 2019-21 Peace Vision (French version) was successfully launched on 15 July 2019 during a side event at the High-level Political Forum in New York. The Peace Vision is a jointly developed framework that builds on existing international agendas including the Women, Peace and Security Agenda, the Youth, Peace and Security Agenda, the Sustaining Peace Agenda, the Conflict Prevention Agenda and the United Nations/World Bank’s Pathways for Peace report.

Download the concept note for the ministerial launch in English and French.

Ms. Elissa Golberg, Assistant Deputy Minister, Strategic Policy, Global Affairs Canada, opened the event on behalf of the Canadian government and in particular, the Canadian co-chair of the International Dialogue on Peacebuilding and Statebuilding (IDPS), Maryam Monsef, Minister of International Development and Minister for Women and Gender Equality. She noted that the Peace Vision is a blueprint for how the three constituencies of the IDPS will collaborate together into the future to drive positive change in countries experiencing conflict, fragility and violence.

H.E. Francis Kaikai, Minister of Planning and Economic Development in Sierra Leone and co-chair of the IDPS, led the event, supported by the following ministers:

In his opening statement, H.E. Francis Kaikai called attention to the Peace Vision’s overarching goal of delivering increased, better-targeted and more effective country-owned peacebuilding and statebuilding that will amplify and sustain efforts to achieve the 2030 Agenda with a focus on SDG 16. He highlighted the commitments in the Peace Vision, against which IDPS members will hold themselves accountable, and looked forward to the implementation of the jointly developed framework.

H.E. Deqa Yasin Hagi Yusuf, Minister of Women and Human Rights Development in Somalia spoke of efforts to revise Somalia’s constitution and electoral laws, thereby providing a unique opportunity to empower women to contribute to building sustainable peace and development. She said that by securing progressive constitutional gender equality provisions, it was possible to lay a critical foundation for the advancement of women’s rights throughout the statebuilding process, citing the example of the Somali Women’s Charter in her country. Watch her video message online.

Mr. Jorge Moreira da Silva, Director of the Development Co-operation Directorate at the Organisation for Economic Co-operation and Development (OECD), spoke of the need for donors and multilateral institutions to create incentives for private sector investment in conflict-affected situations, referring to the Kampala Principles on Effective Private Sector Engagement in Development Cooperation. He added that the Peace Vision’s recognition of the private sector’s role in supporting peacebuilding presented a great opportunity to make progress in this area.

Mr. Theophilus Ekpon, Chair of the Executive Committee of the Civil Society Platform for Peacebuilding and Statebuilding (CSPPS) called attention to the importance of an enabling policy environment to counter attempts to shrink civic space in conflict-affected situations. Other essential elements of an enabling environment include security for civil society actors working in conflict situations; sustained funding; and capacity building so that they can fulfil their crucial role of holding governments to account.

H.E. Félix Moloua, Minister of Economy, Planning and Cooperation, Central African Republic highlighted the role of partnership and sustained dialogue, both internally and with international partners, in his country’s ongoing path towards peace, economic stability, and national cohesion. He noted the importance of implementing the National Recovery and Peacebuilding Plan 2017-21 with partners in Central African Republic and the need to ensure inclusive growth to foster cohesion at national level.

In his closing remarks, Dr. Helder da Costa, General Secretary of the g7+ Secretariat, recalled that the outcome document from the 5th g7+ ministerial meeting held on 26-27 June 2019 committed g7+ members to implementing the Peace Vision. Citing the Lisbon Communique, he said:  “As a constituency of the International Dialogue on Peacebuilding and Statebuilding (IDPS), we welcome the IDPS Peace Vision 2019-2021, and we commit to working with our partners to realise the objectives therein.”

What did we learn from the event?

What can we do as a community to advance the Peace Vision’s agenda?

“Our experience in Somalia shows that advancing women’s empowerment is a critical ingredient for sustainable peace and development in fragile and conflict-affected contexts…we believe that with the right partnerships, Somalia can become an example of what women’s effective engagement in peacebuilding and statebuilding can look like, delivering important lessons and evidence for other contexts. The IDPS could be an important ally on this journey.” 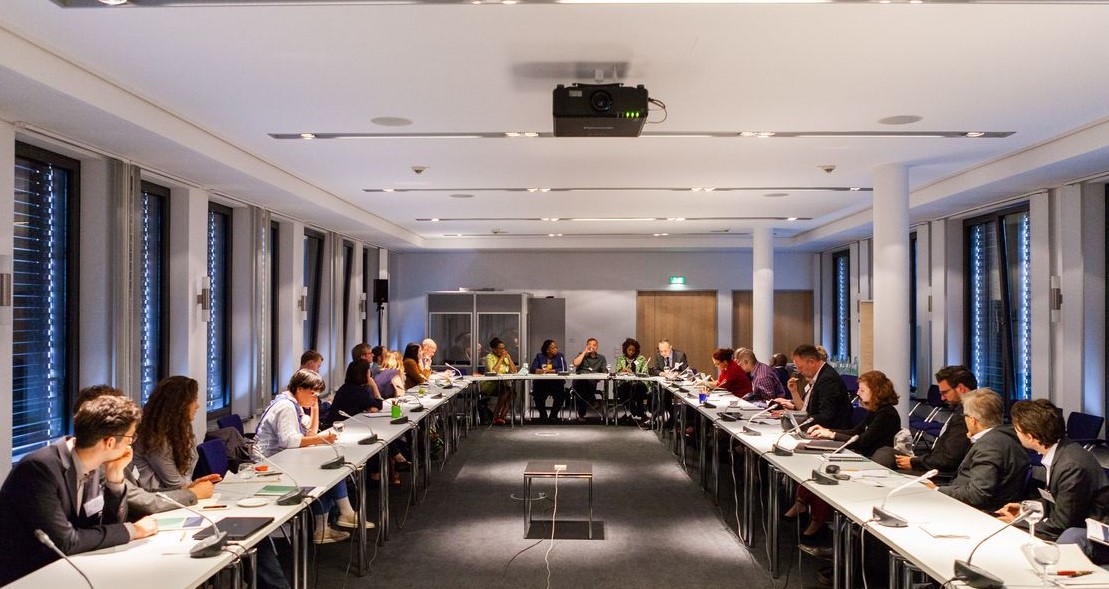 This IDPS panel session was held on 13 June 2018 at the the GIZ sponsored FriEnt Peacebuilding Forum 2018. It brought together members of the IDPS with CIC/NYU Pathfinders multi-stakeholder partnership to implement the SDG16+, to provide their perspectives on the role of inclusive dialogue processes between donors, governments and civil society, in supporting peacebuilding and statebuilding and the Agenda 2030 in Sierra Leone.

The Role of Young People in Promoting Peaceful, Just and Inclusive Societies

A forum entitled “The Role of Young People in Promoting Peaceful, Just and Inclusive Socities” took place on July 19, 2017 as a side-event to the United Nations High-Level Political Forum in New York City. The goal of the event was for participants to exchange information and experiences surrounding the role of youth in conflict-affected and fragile countries, and more specifically with regard to the implementation of UN Security Council Resolution 2250, which calls for greater inclusion of youth in local, national and international decision-making and peace and statebuilding efforts. Resolution 2250 was created in recognition of the threat to stability and sustainable development caused by the radicalisation of youth. The theory behind the Resolution is that greater youth inclusion in all decision-making arenas will decrease radicalisation and violence, as it will provide young people a say in both their own futures and the future of their country.

Today, 1.5 billion of the world’s poorest live in countries grappling with conflict or fragility. By 2030, without coordinated international action to tackle the root causes, two thirds of the world’s poor will be living in countries and regions plagued by endemic violence, and fragility. This will undermine any prospect of achieving the UN’s ambitious goal of eradicating extreme poverty in Agenda 2030, which the world signed up to last September. And, crucially, it could further precipitate the global humanitarian and refugee crises and heightened threats of terrorism with increasing repercussions on a global scale.

Recognising the urgency of this challenge, members and supporters of the International Dialogue on Peacebuilding and Statebuilding, from over 40 countries, gathered in Stockholm on 5 April to commit to speeding up and scaling up their efforts to prevent conflict by tackling its root causes.

The Effective Institutions Platform (EIP) and the International Dialogue on Peacebuilding and Statebuilding (IDPS) joined different branches of the federal government of Somalia and development partners for the Somalia High Level Partnership Forum held in Istanbul from 23th to 25th February 2016.